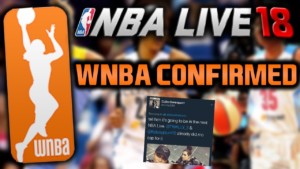 The Women’s National Basketball Association and all the players of its 12 teams will make their video game debut with NBA Live 18, EA Sports announced this morning.

The teams will be available from the game’s WNBA Play Now menu, meaning they will be available only for one-off play offline or online (not in any of the game’s career modes, in other words), and not against NBA teams. The league’s most recent All-Star team will also be available to users, senior producer Mike Mahar told Polygon.