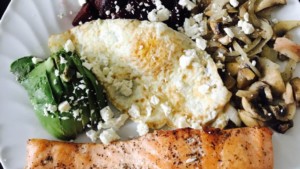 On the court she’s known for her formidable defense. Off the court, she has a passion for something else: good food. The 35-year-old, who co-owns Mellow Mushroom, a pizza franchise in Roanoke, Virginia, with former teammate Marissa Coleman, sees a future as a restaurateur after retiring from the WNBA. For now, she filled us in on her favorite pregame meal. And nope, it’s not pizza.