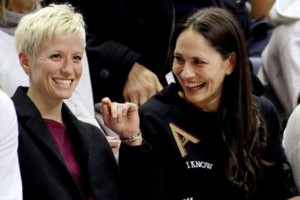 Sue Bird recently watched a documentary on the early years of the NBA, and it reminded her of the challenges faced currently by the WNBA.

“Homophobia hurts our league. Racism hurts it. Sexism hurts it,” the Seattle Storm guard told espnW. “For [the NBA], it was a big racial issue. For us, it’s racial and gender.”